German for Reading and Speaking

Allow me to state an unorthodox idea: when it comes to learning a modern language, we mostly have things backwards in our schools and universities.

First of all, consider how we learn our native language. We’re bombarded with English during every waking moment from infancy on, and in the process our brain discerns and stores patterns that eventually allow us to communicate by speaking and writing.  On the other hand, most of us have only a passive knowledge of how our language actually functions, and it’s only until we learn something about grammar and syntax that we’re in a position in which we can think about the use of our language consciously.  Whether we can or can’t, however, most of us manage to communicate quite well without any knowledge of our language’s structure, and we accomplish that by having been thoroughly saturated with English from the moment we leave the womb.

Compare the saturation approach to language-learning with the inductive approach commonly used in schools and universities.  Fundamentally, they’re not dissimilar: students are confronted with a new language for forty-five minutes or so each day with the expectation that they’ll gradually discern and store patterns that will eventually allow them to communicate by speaking and writing in the given language.  The problem with this model is that they’re not bombarded with the given language during every waking moment: they’re placed in a classroom with all of its normal distractions for a limited period of time and rarely have an opportunity to interact one-on-one with the only native speaker in the room, namely, the teacher.

With that in mind, I would argue that there are only two realistic approaches for students, especially older students, who are seriously interested in learning a modern language: 1) they can move overseas for several years and thoroughly immerse themselves in that language, or 2) they can spend time in this country thoroughly learning how the given language functions so that, once abroad, they can absorb the language like a sponge.

This can be compared with improvising in jazz.  There were players like Erroll Garner who couldn’t read music but who spent practically every waking moment surrounding themselves with the music of excellent improvisers during the heyday of jazz.  There have been many others since then who, in light of the fact that they can’t simply go from jazz club to jazz club every night of the week, have turned to jazz theory as an additional means of mastering the idiom.

In short, grammar and theory are forms of shorthand for language and music, respectively, and for busy adults and for pupils and students ingesting daily 45-minute doses of a modern language in crowded classrooms, a thorough acquaintance with any given language’s grammar and syntax (that is, with its morphology) is the only viable alternative for anyone who wants to learn a language quickly and thoroughly.

That’s what I have to offer, a thorough grounding in German grammar and syntax with the purpose of developing strong reading and writing skills and placing students in the position where, once learned, that understanding of the morphology of the German language will allow them to follow up their study with an extended stay in a German-speaking country where they can rapidly put those skills to work.  A strong foundation will have been created by then, and it will simply be a question of building on it by living for an extended period of time among native speakers.

With this approach in mind, I often take tutoring students through a book like Sparks and Vail’s German in Review, for example, and once that material is thoroughly mastered, they have the option of continuing their study with me by turning to classroom textbooks such as Sokolosky’s Denk mal!, Niebisch’s Schritte plus, or countless others that stress speaking and listening, skills which by that point will come much more easily to them.

To sum this up, if you want to learn German with me, you can count on focusing on reading and writing before we eventually turn to speaking and listening, though a far better option for you at that point would actually involve taking an intensive summer course in a German-speaking country or even relocating to Vienna or Munich for several years if possible, better options by far! 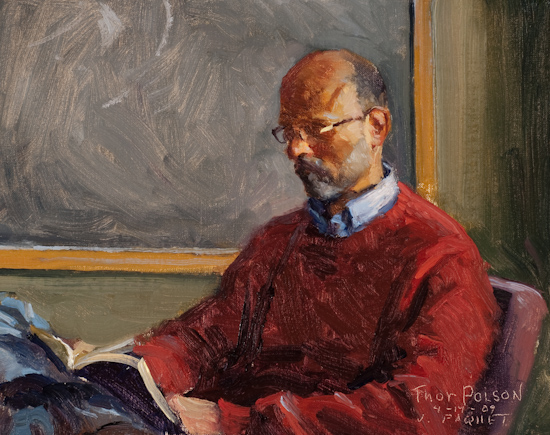